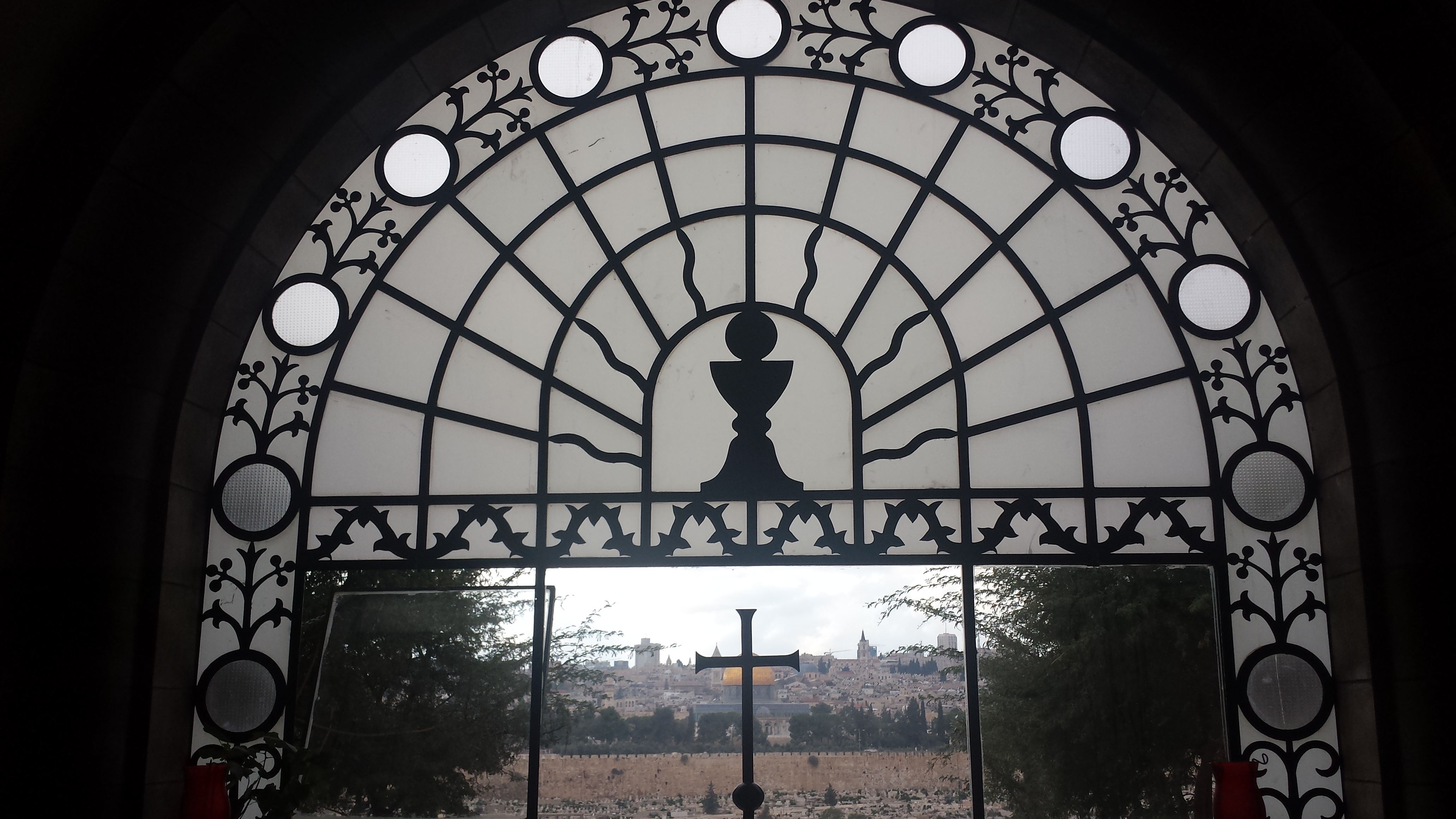 Today, Christians around the world are celebrating Palm Sunday. This is the day that

Palm tree in front of the Church of the Anunciation (Nazareth)

marks what is referred to as the Triumphal Entry, when Jesus entered into Jerusalem to celebrate Passover. (This act was also the fulfillment of Old Testament prophecy about the Messiah.) It’s called Palm Sunday because the people placed palms on the ground where Jesus’ donkey was to walk – as a way to show honor.

When he came near the place where the road goes down the Mount of Olives, the whole crowd of disciples began joyfully to praise God in loud voices for all the miracles they had seen:

“Blessed is the king who comes in the name of the Lord!”

“Peace in heaven and glory in the highest!”

Some of the Pharisees in the crowd said to Jesus, “Teacher, rebuke your disciples!”

Jesus’ entry into Jerusalem began on the Mount of Olives, on what is now called the Palm Sunday Road. Partway through the journey, the view opened up to a panoramic glimpse of the city of Jerusalem and the second temple. During a recent trip to the holy land, I took a photo of what that view looks like in the present day:

As he approached Jerusalem and saw the city, he wept over it and said, “If you, even you, had only known on this day what would bring you peace—but now it is hidden from your eyes. The days will come upon you when your enemies will build an embankment against you and encircle you and hem you in on every side. They will dash you to the ground, you and the children within your walls. They will not leave one stone on another, because you did not recognize the time of God’s coming to you.” (Luke 19:41-44, NIV)

During my trip, our group walked the Palm Sunday Road, tracing the steps of Jesus. We stopped at the Dominus Flevit (“The Lord Wept”) Church, built to commemorate the spot near where Jesus wept over the city. As I stood there, almost exactly five months ago, I had today in mind.  At the beginning of his entry, the crowds cheered for Jesus; but in just a few days, the same crowd would be demanding his execution. Yet, knowing the consequences their actions would bring upon them moved him to tears. Though he knew all of the ways humanity (including you and I) would mess up, ignore him and/or be unfaithful, Jesus still chose to enter Jerusalem on a donkey and set into motion a series of events that would lead to his death.

What a merciful and gracious God.