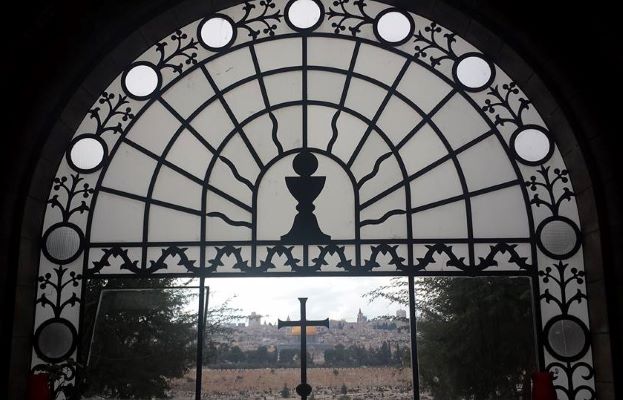 (This is part one of a short series.)
It’s a Friday afternoon in October 2015, and I’m standing in the Garden Tomb in Jerusalem, a site believed by many to be the place where Jesus was buried and resurrected. Upon entering the garden, our group walked by many armed soldiers. This was partly because it was the norm but also because there had been increased violence between Israelis and Palestinians in recent days. In fact, just a few hours earlier, someone had been stabbed nearby.

Inside this holy place, several yards in front of me, is a tourist group in one of the open-air chapels, singing hymns. To my left, another group. People are taking turns entering and exiting the tomb – most of them stop in the doorway to smile for a photo. Directly in front of me is my group and tour guide. Suddenly, I hear a loud siren. Being from the Midwest (and growing up during the 70s and 80s), my first thought is that it was an air raid siren – which is not a good thing, considering where we are. As my level of anxiety jumps from 0 to 60, our guide explains that the siren is notifying everyone that Shabbat (Sabbath) has begun.

So, here I am . . . standing in this holy place while Christians from around the world pray and praise God through song. Meanwhile, the Jews in the area are starting their holy practice of Sabbath. A stone’s throw away is a spot rumored to be the very place where Jesus had conquered death. But I am far from joyful. In fact, I am extremely disturbed and unsettled.

It was the final day of a 10-day trip with a group of about 30; we’d visited in Egypt, Jordan, Israel, and Palestine. Add to that the fact that I’m an introvert with sleep apnea who could always use another hour or three of sleep, and you can understand why my first reaction to the moment was, “Maybe I’m just tired and cranky.” However, being the introspective INFJ that I am, I dug a little deeper and used the moment to talk to God about it. After all, if there’s one place you can bet that God hears your prayers, it’s got to be the Holy Land, right? After some brief reflection, I got the sense that God wanted me to feel disturbed. But why?

There we were, believers inside the garden, praying and praising while people were literally dying. I couldn’t help but see the parallel for many of the churches in the United States that operate in much the same way. I share this in hopes that the Church in the West would experience more of this holy disturbance and respond as the Spirit leads. I’ll talk more about this in the next post.

One thought on “A Holy Disturbance”