April 10, 2017
Today’s post highlights the anointing of Jesus at Bethany, in preparation for his upcoming burial.
#Lent2017 #EncourageYourselfInTheLord #BeEncouraged #PourYourPraiseOnHimLikeOil

April 11, 2017
On his way to the cross, Jesus stopped in the Temple to teach. As usual, the Pharisees tried to trip him up…

“Hearing that Jesus had silenced the Sadducees, the Pharisees got together. One of them, an expert in the law, tested him with this question: ‘Teacher, which is the greatest commandment in the Law?’ Jesus replied: ‘Love the Lord your God with all your heart and with all your soul and with all your mind.’ This is the first and greatest commandment. And the second is like it: ‘Love your neighbor as yourself.’ All the Law and the Prophets hang on these two commandments.” – Matthew 22:34-40
#Lent2017 #EncourageYourselfInTheLord #BeEncouraged #LoveGodLovePeople

April 12, 2017
I struggled to find an adequate song for today’s reflection. I’ve decided to believe that this is because the Wednesday of Holy Week is known by some as Silent Wednesday. The name refers to the fact that Jesus and the disciples weren’t as active on this day, perhaps preparing for the Passover meal. However, this day is also known as Spy Wednesday because it’s the day that Judas agreed to betray Jesus. But Judas didn’t see it as betrayal. Somehow, in his mind, it was a necessary next step to move the revolution forward. His actions are a reminder that our good intentions can have damaging consequences for others – even death. Let his example remind us to think before we act. (Or to paraphrase a construction proverb: Think twice, act once.)

April 13, 2017
In high school, I worked for Chicago’s Gallery 37 program, the predecessor to After School Matters. During the year that I was in the playwriting program (I’d also done visual arts), we got to see a free matinee performance of Jesus Christ Superstar. (Afterward, I met Ted Neely and Carl Anderson – and found out that Anderson’s ex wife was a playwright.) At first, the thought of a musical about Jesus/the Bible seemed pretty blasphemous, really. But Jesus Christ Superstar quickly became one of my absolute favorite musicals (and yall know I love my musicals!). (I am also a “JCS purist” who only acknowledges the 1973 version with Anderson and Neely, lol!)

Today is Maundy Thursday. A lot happened on this day of Jesus’ journey to the cross. He supped (I like that word!) with his closest friends/ministry partners. Knowing that, in a few hours, one would betray him and another would deny him (while the others scattered like roaches when the light comes on), he still knelt down as the Suffering Servant and washed their dirty, grimy feet…

Jesus is God, no doubt about that. But I think it’s easy for us to quickly forget what it must have been like for him to be a human. What I like about JCS is that it helps us think through that. This song, “Gethsemane,” is one of my faaaaavorites from the show! It takes us through the procession of Jesus’ prayer in the garden – after Peter, James, and John kept falling asleep instead of interceding. Many of us know this text well. Jesus asks God that if there’s ANY OTHER WAY to accomplish the goal of the salvation of the world, this would be the time to reveal that plan. Yet, after the grueling prayer session, he yields his will to God. Man…this song portrays that moment in a way that leaves my hands up in worship every time! I hope you are able to appreciate it. (And Neely ROCKS!)

April 14, 2017
Jesus, wrongly accused, was crucified between two thieves who had done the crime and were now doing the time. One fell into the trap of glossing over his guilt to join in with the crowd mocking Jesus. The other was fully aware of his guilt and Jesus’ innocence. He had one simple request for Jesus, a request that revealed his own faith in his moment of darkness: “Jesus, remember me when you come into your kingdom.”

April 15, 2017
I recently highlighted how, in the time when Jesus needed them the most, his chosen 12 betrayed, denied, and abandoned him. It’s a harsh truth but the truth, nonetheless. Today, as we encounter Holy (Silent) Saturday, I’m sharing a piece I wrote last year. It is a little more sympathetic to their plight.

🙂 I’ve chosen once again not to include music, as a way to emphasize the aspect of silence.
#Lent2017 #EncourageYourselfInTheLord #BeEncouraged #WithChristThereIsAlwaysHope 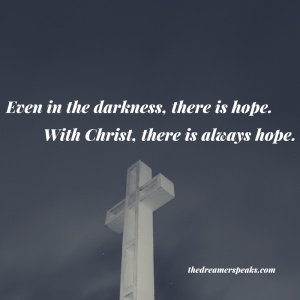 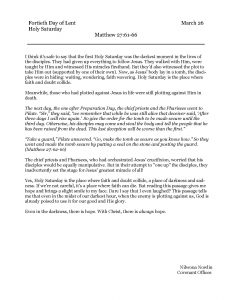 April 16, 2017
Thanks to everyone who joined me on this Lenten journey! I hope that you were encouraged by my posts – and maybe even discovered some new inspirational music!

Well, today is it! Today is the ultimate reason that we can always have hope and be encouraged. I’m sharing two songs, both are on my list of favorite songs about the resurrection of Christ.