Proverbs 3:5-6 is one of my favorite passages of scripture, and it one of the passages that governs my daily life. The only reason I even know these verses is because my mother wrote the scripture address (or the full passage) in just about every birthday/Christmas card she gave me and every letter that she sent me. If it wasn’t Proverbs 3:5-6, it was Philippians 4:13. 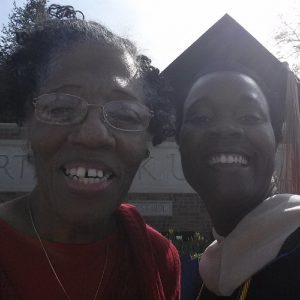 I’m forever grateful for my mother because she truly shaped who I am as a person and as a Christian. So, as I was wondering what to share with you all on this Monday after Mother’s Day, my first thought was to talk about all of the ways that my mother’s sacrifices and support have impacted me. It’s a great idea, but it didn’t feel like the idea. Sometimes, it’s great to hear about a person but better to hear from that person. So I told my mother that I was preparing this post, and I asked her if there was something that she would like me to share on her behalf. It turns out that she’s been thinking a lot about sharing her story with others in hopes that she can help them get through their own storms with their faith intact. So instead of me talking about her, Dorothy Nowlin will share her story in her own words . . .

I was born in Palestine, Arkansas. I never knew my biological father, and I was raised by my great-grandmother, who had also raised my mother. (My grandmother died when my mother was only six years old.) Palestine was a rural area, so my childhood experiences included picking and chopping cotton along with tending to chickens on our land.

As a child, I enjoyed writing stories, poems and plays. I was even in a play at school and had one of the longest speaking parts. The age of 12 was a time of great joy and great pain. When I was 12, I accepted Christ as my Lord and Savior. I remember having to sit on the “mourners’ bench” and also being baptized in the river. But when I was 12, I was also molested by a family member. I never told anyone, but it was a difficult time for me. I once told my mother, who was living in Chicago, that I was afraid that if I didn’t leave the South, I might kill myself. (I even tried once by eating some poisonous plants.) Despite tragedy so early in my life, I graduated from elementary school as the salutatorian.

I moved on to a new life in Chicago with my mother, but a new life didn’t mean no trials. In my senior year of high school, I was also working at a nursing home in the city. One day after work, I was walking to my friend’s house but never made it there because I was raped. I went home to my mother, who called the police and filed a report. Then I had to go on with my life. I graduated from high school, despite the pain. Though there were trials, there were also many times of joy. I stayed in Chicago after high school, got married, found a church home (where I still attend) and had four beautiful children – along with a number of miscarriages. My children are all adults, and I now have three beautiful grandchildren. I even earned my Associate’s Degree in Early Childhood Education at the age of 61.

Looking back over my life, I recognize that I have been through molestation, rape, the death of my husband, a brain tumor and two bouts with breast cancer. As I look back, I just thank God. I sometimes strayed away from him when I was younger, but he was always there with me. I have leaned on Proverbs 3:5-6 so many times in life, and that’s what I want you to know. Trust and obey the Lord, have faith the size of a mustard seed, and he will see you through. No matter what aches and pains I’ve been through, I’ve come out victorious.

So many people go through pain and try to forget it. But I want to share my story in hopes that it will encourage someone else and give them the strength to keep trusting God and hoping for better. I also share in hopes that those who are not saved will be drawn to God because of my story.

One thing I know for sure is that God kept me, and it was for a purpose. So as long as I live, I will tell anyone who will listen about his goodness in my life!

Me with my late husband, Larry, in the 70s Me with my children and grandchildren at the dedication of my youngest granddaughter, Anahi-Rose Me with my daugthers and grandson, shortly after I began chemo